Observations at a Prize-Winning Home

Bernard promptly implemented those recommendations, and nine months later, he could not be happier. The grading, new swales, and other water conservation tools have vastly improved water catchment and flow on his property.

Matthew Smith, a member of the Water Group and owner of an excavation company in Pioneer Town, led the work on Bernard’s property. “The goal was to slow down water flow to prevent erosion and allow more time for runoff to soak into the ground. This was major hardscape,” he said.

During a follow-up visit last month, Matthew led a tour of Bernard’s property with new and old members of the Water Group. From this walk around, Water Group members recommended additional ways to integrate design elements. This included adding drainpipes between swales and collaborating with neighbors to protect the swales during driveway grading.

Overall, the work resulted in a great improvement of water flow and a successful start to practicing permaculture.

JTLFP Dinner and Holiday Bake Off, Sunday, December 16 at 5 PM 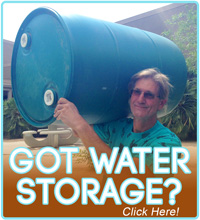